At the Board Meeting on the 17th of September, the Warners Bay Rotary Club’s board agreed to support a submission put by Rotarian Liska Roberts (International Director) to give 12 months support to a facility in Panabo City in the Philippines called Sabella’s Learning Centre.
Here around 20 children who would otherwise be walking the streets, receive an education, one good meal for the day and other support they might individually need.  Liska her husband (Rotarian, Scott) were instrumental in setting up the facility (which is named after their daughter Sabella).
Liska said ‘  “When visiting Panabo City, in the Philippines over 3 years ago I found that a large number of very young children were walking dirt roads with nothing to do and no adult supervision.  Most of the children were living in extreme poverty.
We started by handing out books, but we wanted to do more for the children who are so willing and keen to learn.  In response, we decided to start a facility that would offer some learning benefit for a limited number of such local children  ‘Sabella’s Learning Centre’ was what emerged from this ambition.  The school started with 6 students and now there are 22″.
The Board supported the submission that $400 per month be sent to the school from our Charity Account, this will be sufficient to pay for basic teaching services, accommodation (as needed) and meals for the children for the period of one year, as well as some expenditure on the top for teaching materials.  In the meantime, efforts will be made to see if the project can be assisted in the future under the RAWCS programme.
Liska will also be seeking speaker engagements with other clubs, to see if they would like to sponsor one of the places in the Learning Centre.  She is a very engaging and passionate speaker, with plenty of powerpoint pictures to introduce Rotarians to the kids who are there. Just $400 pledged by a club will pay for one child for 12 months, as well as assist our club to provide additional services and help progress other options for additional places that are so badly needed there.  Liska will be aiming to get around 20 sponsorships from clubs and/or businesses in the district during the coming year.
Rotarian Liska and some of the children at Sabella’s Learning Centre 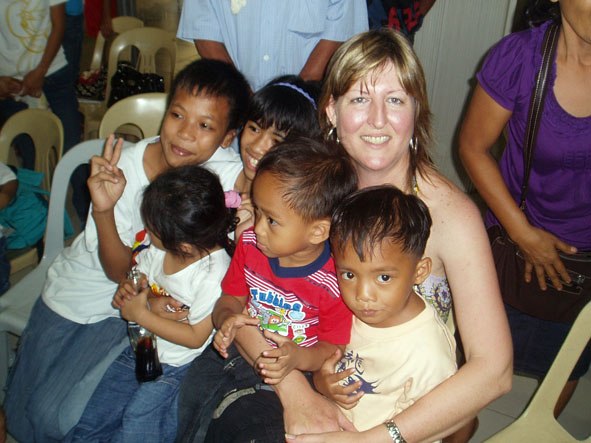 Opening some of the gifts that Liska sent to Sabella’s Learning Centre last year.  Our Rotary Club paid the freight. 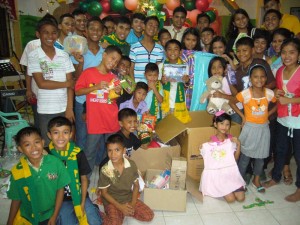